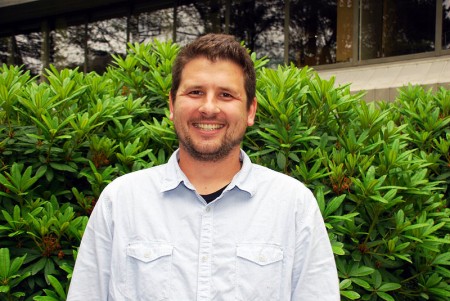 When we speak of air pollution, we generally think about the air outside. However, the vast majority of our time is spent indoors. Few studies have looked at how outdoor air pollution affects indoor air quality.  We sat down to gain some insight with Perry Hystad who completed his doctoral studies on air quality at the University of British Columbia.

Why is it important to study indoor air quality?

Were there any surprises in your findings?

In one part of my study, I had monitors inside houses and was able to look at indoor levels of air pollution and see how those varied with different activities. All these households were non-smoking yet about half the houses monitored had higher indoor air pollution levels than outdoor.

Why is air pollution so much higher inside the home?

Indoor air pollution levels are higher than outdoor due to indoor activities. How you heat your house is important—using a wood stove makes a big difference. Cleaning, vacuuming for example can pollute the air, as well as lit candles and incense. Pollution sources in the home are about 1000 times greater than outside the home, simply because sources outside disperse quickly.

So then your study results may have public health policy implications?

The most obvious policy implication is building codes and standards. If we changed the building code to require mechanical ventilation of filtered air it would make a difference toward improving indoor air quality.

Personal air filters that can be placed inside the home can also reduce indoor air pollution, which has been shown by another researcher at the University of British Columbia. Tax incentives could therefore be given to individuals who purchase air filters as well to increase the use of such devices.

There was also an interesting socio-environmental justice aspect to the findings. People living in the lowest valued homes had significantly higher infiltration than higher-valued homes. This is the only study that’s shown that lower socioeconomic groups have higher infiltration. Other research shows that the lowest socio-economic groups tend to live in areas with higher outdoor air pollution. So not only are they potentially living in areas that have higher outdoor air pollution, they’re receiving more of that air pollution into their homes, meaning they have higher exposure levels than people previously thought. So this is the first study that showed this socio-environmental aspect of exposure.

Do you think there’s much public awareness around indoor air pollution?

I found that people who participated in the study were more concerned with outdoor air pollution. No one was really worried about indoor sources. Yet in over half the homes we monitored, indoor levels were actually higher than outdoor. People weren’t really aware of this.

Has your research had any influence on how you approach your home environment?

Yes, and my girlfriend too. When she saw the results of these studies, she stopped using candles so often. As well, I never tended to use the range hood fan when I cooked, and it’s something I definitely do now. It made a big difference in the air quality of the homes that we monitored.

As well, seeing the results of this and other studies around air pollution levels definitely had an impact on where I want to live and how to further reduce pollutants in my home.

What advice would you pass on to readers about indoor air quality?

Be aware that any pollution source in the home contributes approximately 1000 times more than a similar source outside the home.  Keeping that in mind is really helpful. If you know that you are causing pollution in your home by cooking, frying, cleaning, etc., make sure to have air circulating through the house.