Elara was born on September 5th 2010, 10 weeks prematurely.  Even though she was breathing on her own and doing well we were terrified.  Things got even scarier when Elara suddenly went into cardiac arrest on September 8th.  Elara was resuscitated and complex congenital heart defects were discovered.  She had 5 heart defects all rolled into one.  She was immediately placed on a ventilator and was suddenly critically ill.  Because of her size and prematurity she didn’t qualify for heart surgery at that time.  She lived on a ventilator with congestive heart failure, severe lung infections and a blood infection until she was two months old.

On October 31, 2010 she was transferred to Stollery Children's Hospital in Edmonton via air ambulance and on November 2nd, 2010 she had her first open heart surgery.  Her surgery started at 6am.  At 4:30pm the surgeon found us and remarked that Elara had survived one of his most “spooky” surgeries.  She received over 30 blood transfusions during that surgery.  Two weeks later Elara was finally able to come off the ventilator and was flown back to the Saskatoon Royal University Hospital NICU.  It was then noted that she suffered a common surgical complication.  Her left vocal cord was permanently paralyzed.  Because of this Elara remained on a feeding tube and was unable to eat, drink, or taste anything.  Because her vocal cord was paralyzed it couldn’t move when she swallowed.  This meant that food or drink might have gone into her lungs instead of her stomach which is extremely dangerous.

On May 31, 2011 Elara had her second open heart surgery.  This surgery was much easier for Elara and lasted only 4 hours.  Unfortunately, she suffered another complication of open heart surgery.  The phrenic nerve was damaged and her right diaphragm became paralyzed. This caused paradoxical movement of the diaphragm.  When she inhaled, her left diaphragm would pull down and cause the right side to come up, not allowing any air into her right lung.  She developed a condition called atelectasis.  Three quarters of her right lung was effected. Elara required chest physiotherapy and oxygen for 5 months.

After all of this resolved, Elara still remained an extremely loud breather.  She had stridor almost all of the time, she snored very loudly and struggled to breathe.  As she got bigger and stronger she got more and more active.  We noticed when she was working hard to do something or trying to walk that she would get very wheezy and start changing colour.  She would turn a shade of greyish purple.  When Elara would cry, she would turn a horrible colour and sometimes even pass out.  Concerned, I called her cardiologist who assured me that the colour change was not related to her heart.  Soon, Elara landed in the paediatric respirology office at Royal University Hospital.

After a thorough examination it was determined that the act of breathing was actually causing her paralyzed vocal cord to become inflamed.  The doctor explained that her vocal cord was paralyzed in a closed position which was causing an airway obstruction.  He explained that ever since her first surgery her airway has been obstructed by 50%, 100% of the time.  As she becomes active, the act of breathing causes her vocal cord to inflame which reduces her airway even further!  Elara started a daily breathing treatment using a steroid in a nebulizer to help reduce the swelling of the vocal cord.  After only 5 days of treatment Elara’s we noticed a dramatic improvement in her breathing.  She was much quieter with activity and stopped snoring!!

We have always been extremely careful in the winter during cold and flu season, but were reminded by the respirologist to take extra care this winter.  Something as simple as a cold could be extremely dangerous for her because her airway is so complicated.   Just this last April, Elara picked up the common cold, spent a week in the hospital, and nearly ended up in the intensive care unit.  Because of this, we ask that everyone think about Elara and other people like her.  Consider people with complicated airway and lung issues when you are feeling unwell! 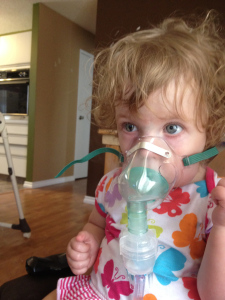