Janet’s story: Six years ago I was diagnosed with lung cancer 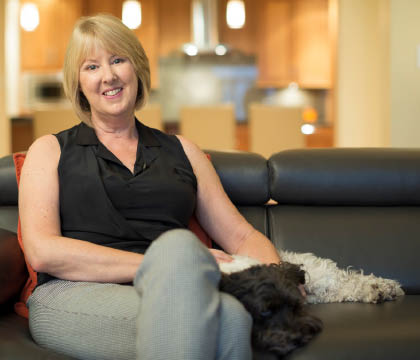 Six years ago I was diagnosed with lung cancer. I had most of my left lung and lymph nodes removed in my first surgery and tumours removed from my right lung in a second surgery three months later. I’ve never smoked.

Finding out I had lung cancer was a huge shock for me. Like many people, I thought only people who smoked got lung cancer. But that’s not the case.

Indoor radon exposure is the leading cause of lung cancer after smoking – and as it turns out I had been exposed to a lot of it.

When I got diagnosed with cancer my husband and I sent radon detectors to the homeowners of the homes we had lived in previously. Because of my husband’s work, we both knew a lot about the risks of radon.

One of our previous homes, located in Ottawa, tested a staggering 16 times above the Health Canada radon guideline of 200 q/m3. And, given I worked from home for many years, it follows that I was exposed to a lot of radon for a fairly long time. Fortunately, the new owners of our old house have since fixed their radon issue by installing a radon mitigation system and the home is now completely safe for the current homeowner and family.

Because of Canada’s geology, there are radon hot spots throughout the country, including British Columbia. Radon is a radioactive and carcinogenic gas that is in every indoor environment to some degree. Health Canada recommends that all Canadians test their homes for radon as testing is the only way to know if you are at risk. As of yet, there are no national or provincial requirements to test homes, workplaces or schools in Canada, and this clearly needs to change.

I am sharing my experience with British Columbians because I want to urge family physicians and the medical community to get behind the indisputable fact that exposure to radon gas causes lung cancer. I would like to see the BC government pass legislation that requires all homes, workplaces, schools and daycares to be tested. Lastly, I want to ask that all homeowners and renters test where they and their family live, and urge everyone they know to do the same.

Radon-induced lung cancer is very real and can be easily prevented.